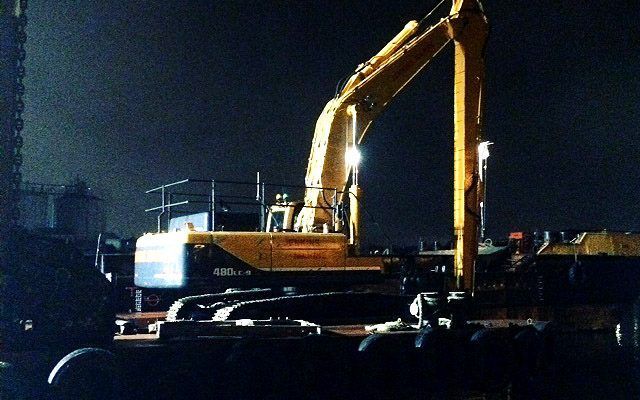 Its time for our Winter Dredging Roundup. It’s been a busy winter for the Jenkins Dredge team…

Since the Nab and Needles returned from Scotland in September 2017 they haven’t stopped! The Doreen Dorward, Nab and Needles started a maintenance dredge in September for Dean and Reddyhoff Marinas at Haslar Marina (just inside Portsmouth Harbour entrance, and opposite the iconic Spinnaker tower), of over 30,000m3. Spoil had to be loaded and transported to sea near the Nab Tower disposal ground off the Isle of Wight. This was completed in November, and followed by some vessel maintenance works back in Poole.

Early December saw us start work in Plymouth for the Yacht Haven’s group using our new 48t long reach excavator. Dredging was required to bring sea bed levels back to original depths at Plymouth Yacht haven, Yacht Haven Quay and Turnchapel Wharf, with an estimated total dredge of 75,000m3. Disposal of dredged spoil is to the newly opened Plymouth Deep sea disposal site outside the approach to Plymouth Sound, which has been closely monitored by the MMO (facilitated by AIS tracking devices on all Jenkins Vessels).

Works here are still ongoing in Plymouth, and due to completed just before Easter 2018, ready for the start of the boating season!